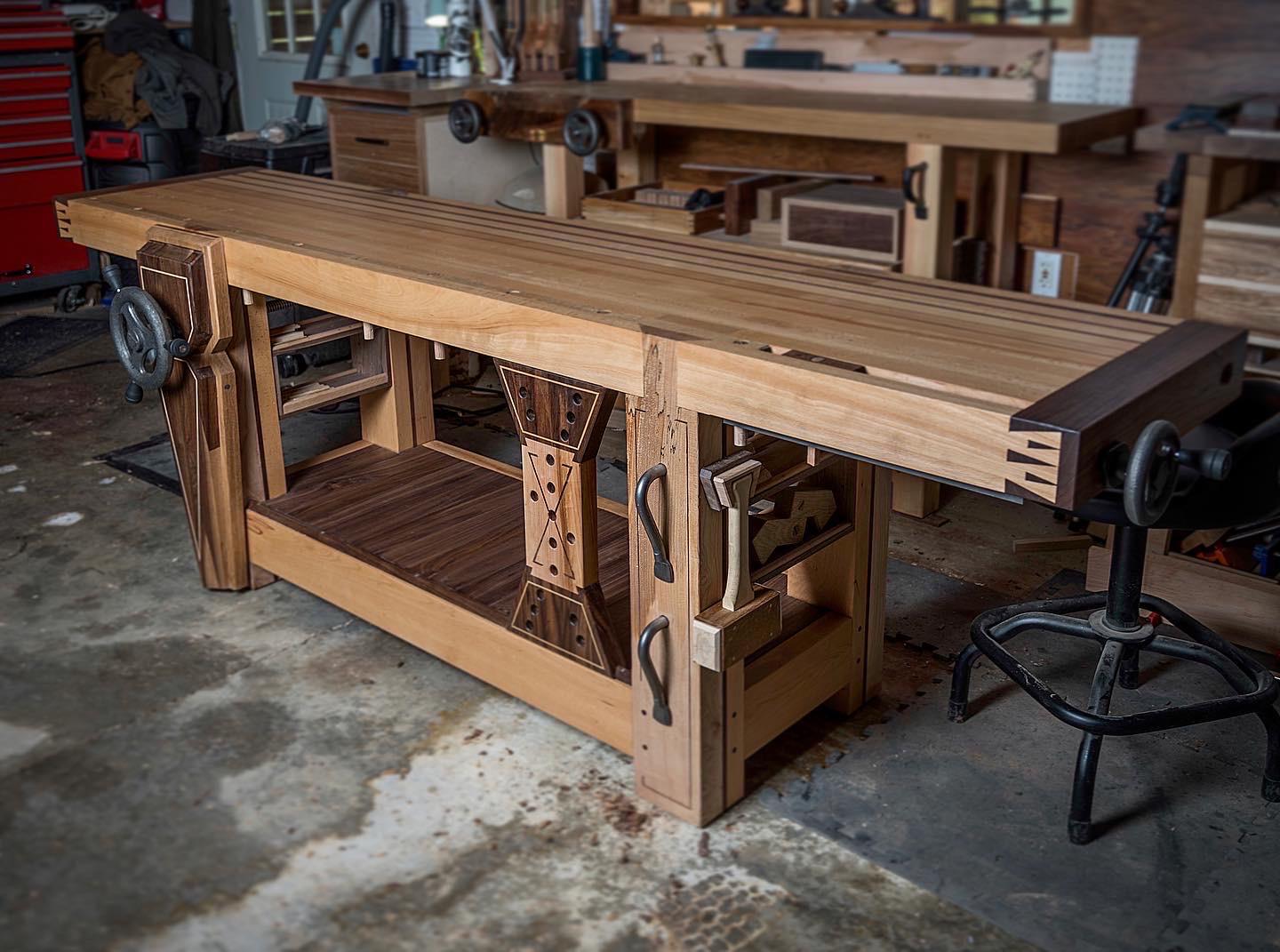 In the s, a French craftsman named Andre Jacob Roubo took the time to record his vast woodworking knowledge, presumably for the benefit. I've had a Roubo-style workbench at the top of my to-do list for several years now. In fact, three years ago I helped a friend mill several large trees that. The Split-Top Roubo Workbench is a modern twist on the classic Roubo design, inspired by Plate 11 of Andre Roubo's L'Art du Menuisier. CUSTOMER PORTAL TEAMVIEWER

Inc VAT. Guido Henn, the German master cabinetmaker, built it for Fine-Tools. A modern adaptation with high-quality accessories first became possible because of the hardware developed and produced by the American manufacturer Benchcrafted. As Henn built the prototype bench, we also drew up a detailed set of plans and made explanatory videos so that any reasonably experienced woodworker could build their own Roubo-style workbench. Instructions with detailed plans Step by step, Guido Henn guides you through construction process and explains every detail.

He covers the various obstacles and common problems involved in builds like this one, so that you can master all of the needed techniques. We highly recommend that you NOT begin installation without all vise hardware in your possession. Plaese pay attention to this matter when installing the hardware.

The following links will take you to the CAD - files for the Roubo bench, which are in the Vectorworks file format. You must have or download and install a compatible program on your computer to see the files, for instance VektorworksViewer. With a compatible viewer, you can select any or all the bench parts and move, rotate and measure them as needed. This makes the plans very easy and clear to read, and even the smallest components can be examined in detail. Some readers complained that the CAD file provided above could only be opened with Vectorworks and not with the popular programme Sketchup.

After examining many, many workbench designs and almost settling on a German-style bench, I came across the 17th century French workbench of Andre Roubo. This design seemed to have surpassing versatility and an aesthetic superiority to every other design. In the construction process I learned of the trade-off between functionality, design, and ease of construction.

I have made awkward-looking workbenches in one day which function perfectly. I've also made beautiful tables quickly and easily which are only useful as buffet tables. To make this workbench functional and attractive required that every surface be planed properly, and every corner be a perfect 90 degrees.

This style of bench begins with a few very large slabs of wood. The top and legs are each 5" thick to provide a simple shape with no joists or apron and the heavy stretchers provide ballast. The top is 72" long and only 20" deep. The narrow top discourages me from putting too many things on the bench at one time treating it like a table, which it isn't and the overall small dimensions are compensated for by the workholding features and dead weight.

Holding down a heavy beam or large plywood sheet is no problem and the bench doesn't rock or scoot. The legs and stretchers are reclaimed old growth Douglas fir. Though mine were salvaged and thirty winters have hardened these beams nicely , here on the West coast, 6"x6" Douglas fir is a standard dimension. But finding a mass of wood for the top that's both deciduous and contiguous is a taller order.

The top of a workbench should be hard. Exactly how hard depends on a few factors; if you're going to be working primarily with hard woods, then your bench should be hard enough to take some use but not so hard that it might mar the wood you're working. It's better to dent your bench than your workpiece. For my bench I opted for poplar wood, as it's harder than pine but still affordable kind of. To keep costs down I used a reclaimed beam of glued-up Douglas fir for the middle 13" of the top.

Since most of the work on a bench takes place around the edges I saved the hard wood for that area. Though I ended-up purchasing the poplar beams, I think sitting in my garage as long as they did before I completed this project qualifies them as reclaimed wood. I had intended to construct this bench using only hand tools.

I succeeded in doing all joinery and crosscuts, most of the drilling and some of the planing by hand. Of Japanese saws I can scarcely speak highly enough. The narrow, self-straightening blade has replaced my western saws for most straight cuts. A brace and auger bit makes easy work of hogging-out mortises which can be cleaned with a chisel and mallet. I use a rubber mallet which is easier on the tools and the ears and I haven't noticed much of a difference in efficiency using a solid wood mallet.

These tools or acceptable analogs are available at TechShop. The legs connect to the top with two huge through tenons, one of them a dovetail to keep from separating. I spent more time on these dovetails than on the rest of the bench. I fit the legs to the front and back poplar rails before gluing the rails to the rest of the top. This made dry fitting easier, though I would be gluing the top together before permanently attaching the legs.

The outside of the legs must be completely flush with the edge of the top slab. This allows the entire side of the bench to work as a clamping surface but is a difficult feature to achieve. I intentionally made the legs a quarter inch too thick then planed them down after being fitted.

One misstep here was only making shoulders on two sides of the stretcher tenons. More shoulder space means a stiffer joint. Everything was dry-fitted several times before the final assembly, wherein I used drawbored dowels and urethane glue. A larger bench might need to be broken-down for relocation, but at 72"x20", heavy as it is, I can move this around if I need to.

There is a lot of glue involved here. I wet every tenon and coated the inside of every mortise before attaching the legs to the stretchers. Once the six parts were loosely assembled the top slab was dropped on. After it bottomed-out by means of lifting each side and slamming it on the floor a few times I used the draw-bored pins to tighten each of the stretchers' joints.

The through tenons on the top are cut slightly narrow so the joints must be made tight by adding wedges. I cut the straightest-grain scrap I could find and coated each in glue before driving them home. When the glue is dry it's time to chop off those wedges and through tenons.

Pictured is the wood nut for the leg vise, detailed here. A workbench must be able to hold workpieces, otherwise it's just a very heavy table. On the left side I installed a leg vise, detailed here. On the right I installed a quick-release tail vise and outfitted it with a fat wooden chop. This provides a larger clamping area and accommodates a bench dog. To prevent rust I disassembled the vise, stripped-off the paint, then polished and clear-coated the bare metal parts.

For the cast iron body pieces I applied a black oxide patina then a clear coat. Nothing much special going on here. I used the wood lathe at TechShop with a small skew chisel to bore-out the hole until the pin fit snugly then I made a ball and pared it off.

The wood had been repaired with polyester resin. Dog holes should be close to each other and close to the front edge of the workbench. A quick release vise will make short work of readjusting for different-sized pieces, but too much of a part hanging over the throat of the vise means a weaker hold. This is why the holes should be closer together than the allowance of the vise.

To make my dog holes straight and perfectly verticlide, I first tried using an angle guide on my cordless drill I don't have Forstner bits that fit my brace drill. Due to poor manufacturing, the guide didn't work. Plan B was to make a bit extension using the lathe at TechShop and guiding it straight by use of a square. I clamped a board to the underside to prevent tear-out when the bit breaks-through When the battery died I switched to my brace drill which I should probably have used from the start.

Once inside the wood the flutes guide the bit straight down. I had preferred to use a Forstner bit since it makes slightly cleaner holes, but I had to sand each hole clean to get a perfect fit for the bench dogs so the brace was as good a choice. Also, the auger bit evacuated the waste better and didn't get as hot. Besides the series of dog holes, I drilled four more holes for use with a holdfast or other workholding devise.

These should be placed such that the holdfasts can have the most effective reach across the surface. Store-bought bench dogs are ideal if you have too much money. Using a vertical mill at TechShop I planed-off a flat inch at one end and now it's functional.

The addition of leather makes a slightly tighter and gentler hold on the workpiece. Not as cute as bench corgis, but more useful. After a light sanding and damp cloth dusting, the first coat of oil can be applied. A workbench will take a lot of scratches and gouges and a film-forming varnish does not take well to this. But oil will weather water, wine, and wood stain.